by btine
I started to follow Blackbirds and their history around 4 or 5 years ago, thinking it was a great topic for a blog on the early use of fountain pens in schools. The blog has never materialised but I have learnt about Blackbirds a bit. I'm not a collector, although I still have much more pens I could possibly use over my lifetime. These days I'm a simple user enjoying reading on the history of pens and therefore spending significant amount of time on the penexchange.

Before I forget what I've learnt I decided to collate my findings. My guide is based mainly on observation and pieces of information found around the internet. There are a lot of assumptions and plenty more guesses. I still hope someone may find it useful.

The guide has four main parts: 1. Brief history, 2. Models timeline, 3. Overview of the main Blackbird variants and 4. Other information and additional questions.

**CC-BY-SA (Creative Commons, By Attribution, Share Alike): all content (including the pictures) of this guide can be freely distribute, remix, tweak, and build upon, if you wish and are happy to indicate the source. Please share alike.

All pictures in my posts were taken by me, unless otherwise specified.

If you happen to have and are ready to share any information, pictures or scans of leaflets or advertisements, please feel free to add to the thread or contact me.

Blackbirds were introduced before 1915 as the MT economic line of fountain pens. With time they started to be advertised as pens for school children (1920s). In this respect, they remind me of Pelikanos.

I'm almost certain that they were in production in 1914 but it also seems possible that they were introduced several years earlier, maybe in 1911. They disappeared in the late 50s when Mabie Todd ceased to exist.

1907-09 - Production of fountain pens in the UK starts, nibs imported from the US

1921 - Swan lever-fillers in the UK. However, I wouldn't exclude the possibility of the earlier adoption between 1919 and 1920. Blackbirds likely followed the same path around this time, gaining also the safety cap

1921-1929 - Slip-cap dropper filler is phased out, additional lever-filling models are introduced: Big Blackbird, Blackbird No3, Thin Blackbird. Some pens are made of the red hard rubber. Most of these pens will have their celluloid counterparts later. Blackbirds were also made as safety pens.

1927-29 - First pens made of celluloid; Blackbirds: introduction of the ladder feed and slow phasing out of the simple flat one, the new nib imprint: BLACKBIRD 14CT M.T&CoLd (instead of BLACKBIRD 14CT MADEINENG), new celluloid BB2/xx and BB2B/xx (jade and lapis and regular) lines , gold plated clips (nickel plating continues on basic models like the black BB2/60)

1932-34 - Swan Leverless; Blackbirds: Introduction of the new line of small (short) and streamlined Blackbirds BB2/xx (these are sligthtly shorther than the similar but later pens of the 52xx line)

1940-41 - After Harlesden site destroyed, likely only Blackbird 52xx line was resurrected, in the old traditional marbled colours of the BB2/xx series.

1945-52 - The last two models of lever-filled MT Blackbirds: more streamlined and new celluloid patterns. The first model kept the old traditional section of the 52xx line, the later had its section streamlined

1952-58 - Twist-fillers followed by lever fillers in solid colours. Some other Blackbirds were made in the continental Europe as button and piston filling pens. In 1958 Mabie Todd ceased to exist.

As mentioned earlier my interpretation of the Blackbird history is based on observations, assumptions and often conflicting statements found online. The dark fields indicate higher probability of a particular version being in production at given time. The light hatched fields were used to show less probable dates or when I couldn't pinpoint the introduction or the end of the production of a particular variant.

Well, I forgot about the propelling safety model. I admit that I can't really say much about it. I've never had one and can only speculate that it was made sometime in the 20s, possibly for a very short time. Well, a quick internet search confirmed that such pen indeed was produced. The picture can be found on the gopens.com webpage https://www.gopens.com/Old_Vintage_Pen_ ... /Cat50.php under number 111. The page states that it was made in 1916.

Well, there is quite a variety. The pens were made in the UK by MT&Co and MT&CoLd, and in the US. They vary in sizes from 128 to 135 mm; US made pens are usually on the shorter side. The chasing is either wavy (Swan like) or simple (rare). Basically, there are three (at least) types of nibs: MT&Co 12Ct NY, Blackbird 14Ct NY and Blackbird 14Ct MadeinEng (possibly two variants). Four point sizes: Fine, Medium, Medium/Broad and Broad. It's likely that the last dropper fillers were made well into 20s but I don't think we have a certain date of the production end. The very last specimens have an early Blackbird logo stamped on the barrel.

The standard version may feel bland and unappealing but I find it rather interesting. The pen was made for almost ten years or significantly longer, if treating the standard (long) BB2/xx celluloid version as direct continuation. I think that there were some crucial changes (improvements) made over time to the feed, which in the late 20s was finally replaced by the ladder one. Also, this version saw the most changes in the nib design.

The earliest specimens don't carry the logo and have a single groove to the cap. The cap also underwent changes from half-domed to almost completely flat. I don't know when clips started to appear but it likely happened several years after the model introduction. Lastly, the shape of section changed over time slightly. 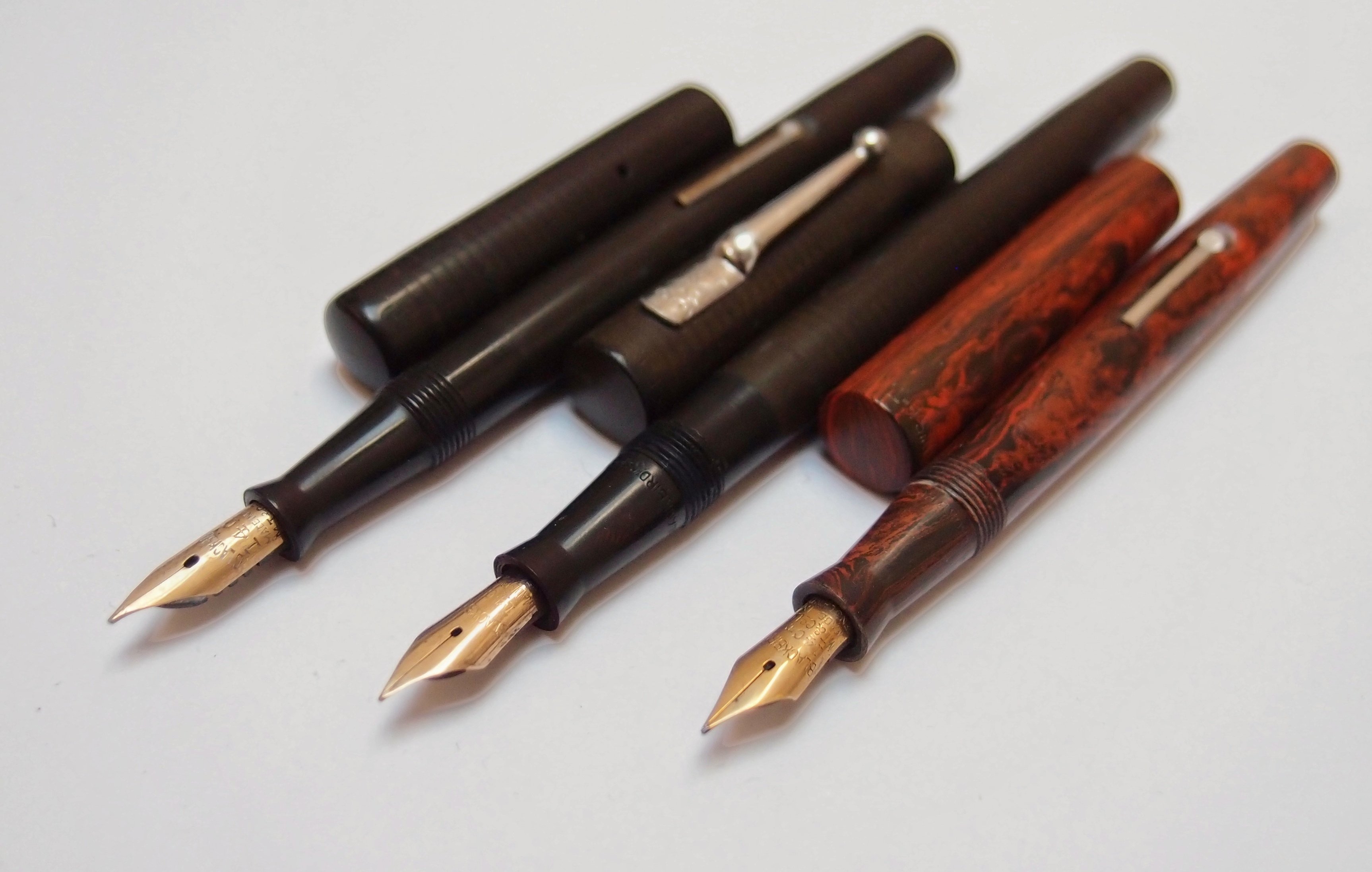 I think that the Thin Blackbird went into production rather soon after the standard model and the theory (of Debs from goodwriterspens.com or just me) is that it meant to provide a similarly looking replacement to the Fountpen dropper filler. Apart from being thinner the pen is basically similar to the standard model (3) and underwent similar evolution.

This is another early model, maybe couple years after the standard (3). A bit upmarket pen with the bigger size 3 nib, Swan like wavy chasing, black hard rubber lever (although the earliest ones would have a regular metal one) and usually with the clip. The overall size is basically the same as of the standard model.

Similar to the Blackbird No 3 pen but longer and fatter, with the big size 8 nib and red (or sometimes black) hard rubber lever (however, the very early pens likely had metal ones, if I can remember correctly). 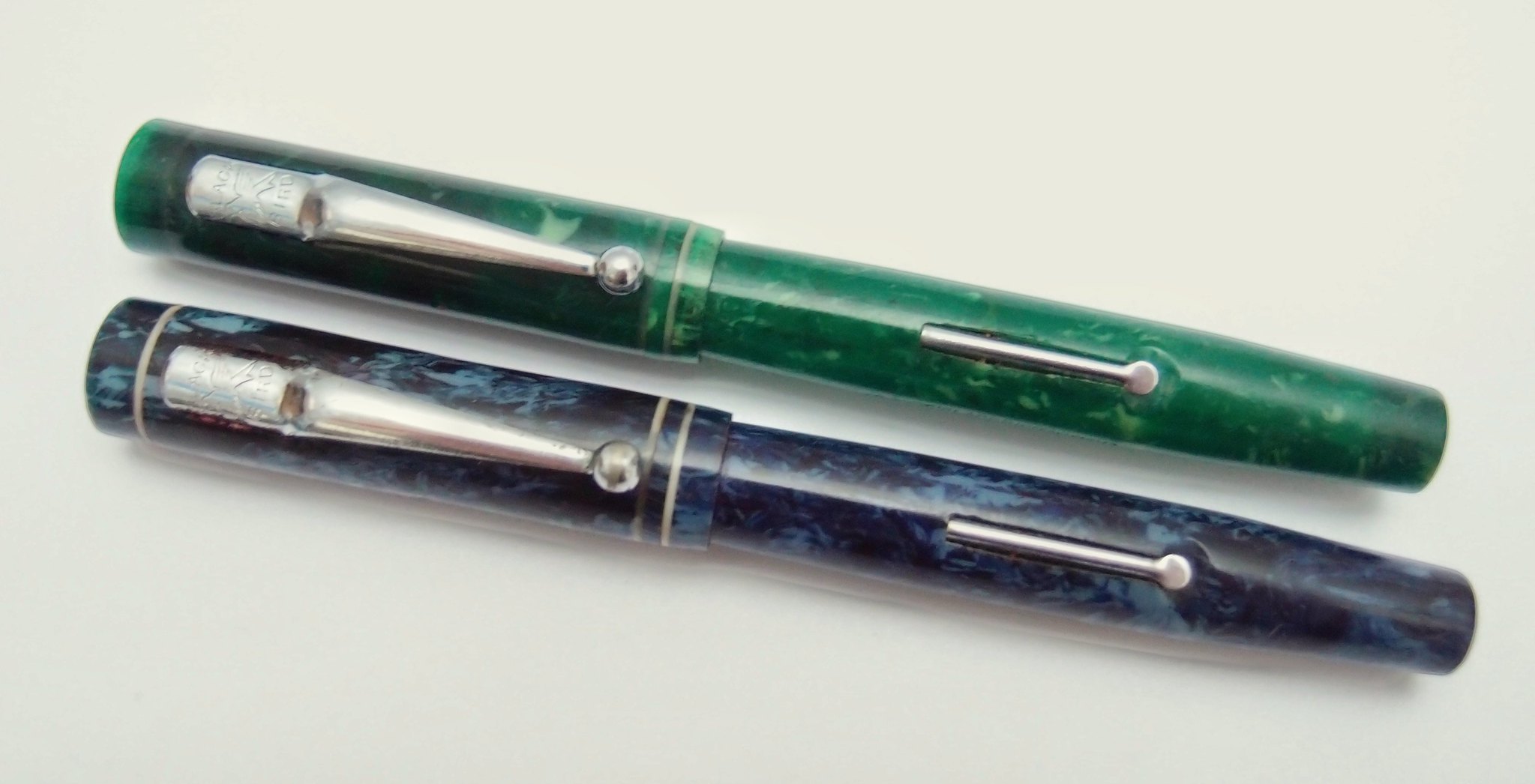 British Mabie Todd was a very late celluloid adopter but I guess it paid off to wait. By the time they started using this relatively new plastic for pens it was already well matured. I haven't encountered many deformations and discoloration is rarely as bad as in earlier American pens.

Jade and Lapis are rather attractive and well made pens, although rather small. They were proudly featured, together with longer BB2s, along Swans in the main MT's adverts.

I think that the Jade is particularly nice. The specimen in the photos shows almost no discoloration (the pen wasn't restored) and the plastic is transparent enough to see the internal filling mechanism working.

The BB2/xx line features some colours not used for Swans which makes them rather unique. Apart from this, the pens share most characteristics with the older hard rubber standard line (3). The interesting fact is that many pens were still made without a clip well into 30s. Early specimens still have the older flat feed.

The BB2B/xx not streamlined pens seem rather rare when compared to the longer original BB2 (8) or the later short and streamlined BB2 (10) model. Actually, one can take a cap from the former and a barrel from the latter to create a BB2B. Only the slightly different shape of sections and the stamped model designation would keep them apart.

The short and streamlined BB2 was probably one of the most popular Blackbirds judging by the sheer number of pens on eBay. And for the very good reasons: well made, extremely durable and splendid writers.

I think that the colours were rather limited when compared to the later 52xx and I can't recall anything beyond the Black, Grey and Green. There were some French and Spanish pens in other colours though. If there was another variant it seems it wasn't very popular among buyers.

The black chased pens have nickel plated clips. The rest have gold plated ones. 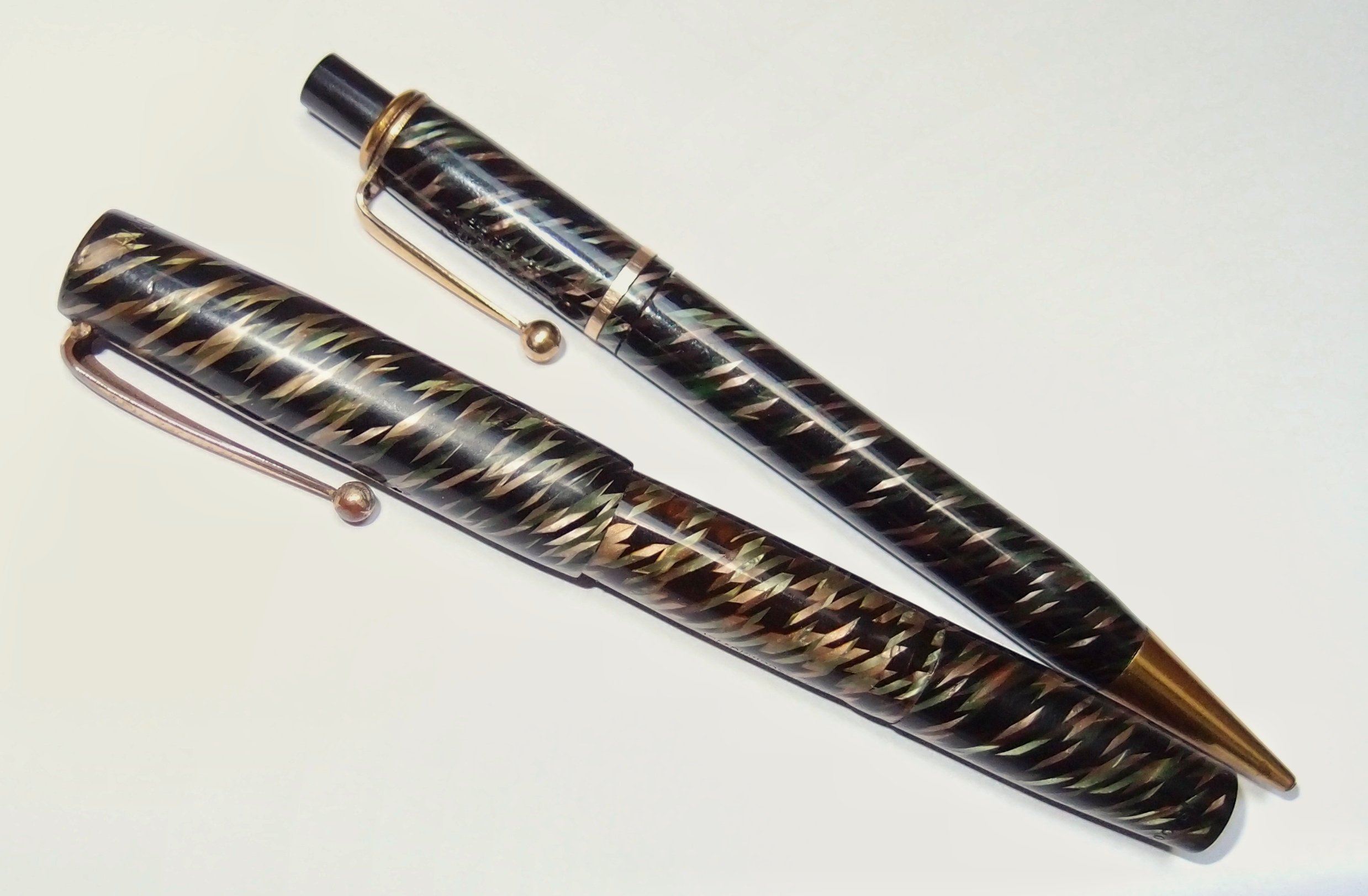 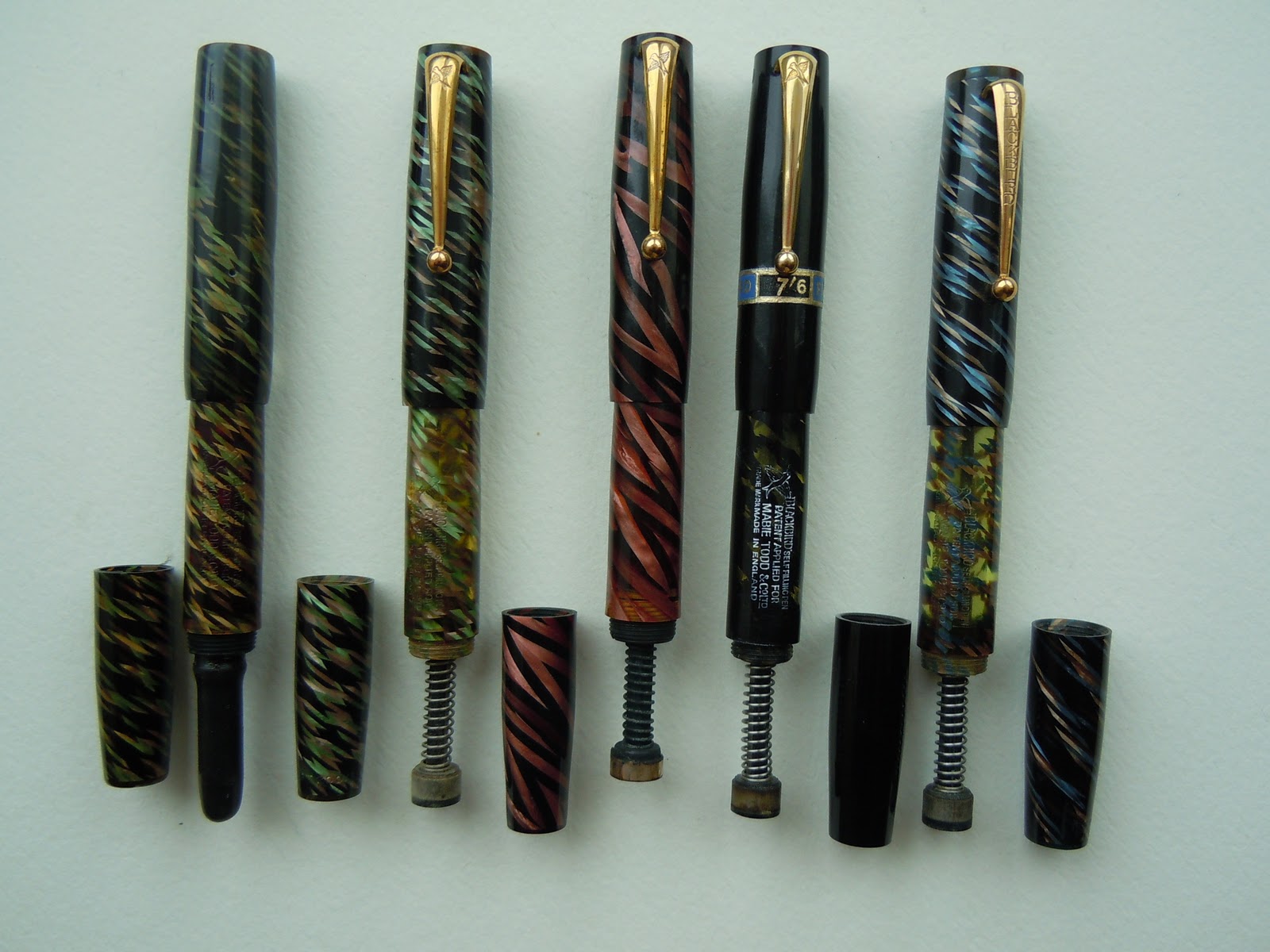 In the chart I placed this safety in the mid/late 30s, which is not correct. I went through my notes again and in my opinion the Blackbird Safeties (screw-on cap dropper fillers) replaced earlier non-self-filling pens (slip-on cap dropper fillers) in the very late 20s. They were made of both hard rubber and celluloid. I don't know for how long they were in production but I wouldn't go beyond 1937.

A bit of housekeeping

by btine
I thought I could complete this guide today but I'm running out of time and starting to realize that there is so much more to add. If you'd like to see it in the final form please pop in three weeks time.

The plan is to add some missing pictures to the model section, model descriptions, section on the nibs, maybe something on the evolution of the logo and some Blackbird advertising.

Of course I'm more than happy to try to answer questions if there are any. Also, if you think that I missed something or the information provided is wrong, please let me know. You can reach me obviously through this forum or its fully fledged German version under the same username.

Asymmetrical tapering of the barrel end as a roll stop?

by btine
You may have already noticed that Blackbirds (and likely Swans, at least some early Leverless pens I had a chance to use) from the 20s, 30s and early 40s have asymmetrically tapered barrel ends. It's often very subtle and at first I thought it was just an illusion or simple material deformation. I went through my collection and most pens had it.

For some time I thought that it had to do something with aesthetics or pen handling. Well, it still may be true but now I'm more convinced that someone clever at Mabie Todd in the 20s had in mind stopping a pen from rolling from a desk. Of course, the metal J bar, of which most weight is on the lever side of the pen, should imbalance it well enough. However, additional trimming of the barrel on the opposite side likely brings some improvement. And in theory it should work for the clipless pens and pens left open without a cap. Nice and tidy solution, isn't it.

I have no idea whether it was a genuine Mabie Todd invention and if other fountain pen producers did something similar. The only example I'm aware of are almost banana shaped Queensway pens.

Grey or Green - discolouration of the BB2/45s

by btine
The Grey BB2/45 pens tend to discolour badly and it's a well known fact. The celluloid darkens and acquires a green hint to the point that most originally grey pens are sold as green. However, although the 45 becomes green, it's still different from the originally green 41. The 41 is more vivid and uniformly green, while a discoloured 45 pen tends to be of muted green with dark patches.

The grey of the 52xx line, 5245, holds up against time much better, and although darkens as well, the green tint is less prominent but pens display some purple hue.

With the 52xx line Mabie Todd introduced another grey, of which numeric designation I can't recall at the moment. The pattern is finer and pens tend to avoid discolouration well and stay bright grey and white.
All times are UTC+01:00
Page 1 of 3
Powered by phpBB® Forum Software © phpBB Limited
https://www.phpbb.com/