One pen, one ink

One pen, one ink

It seems I'm the only person using this forum. Well, a lot of space and I can think aloud and talk to myself.

I think I've always been a one-pen-person. In practice, I still keep several pens at hand reach, have some buried for restoration and buy new ones to try, but I'm almost there.

Once upon a time, almost everyone had to use a fountain pen at school. I used three different Heros before switching to Vectors. No, I wasn't using fountain pens all the time. As soon as it was allowed ballpoints took over. They really seemed so much more convenient at times.

My first proper pen, Parker 88, was carefully hand picked when starting university. Eventually, I gave it to my close friend who lost her. I loved it but for some reason it wasn't replaced. Well, I somehow managed to live on ballpoints and cheap supermarket nibs.

Only several years ago I decided to go for something better again. Unluckily I picked a Sheaffer VFM at my local stationary shop but soon corrected my error by buying Lamy Safari and Pilot Prera. Life restarted and here I am. 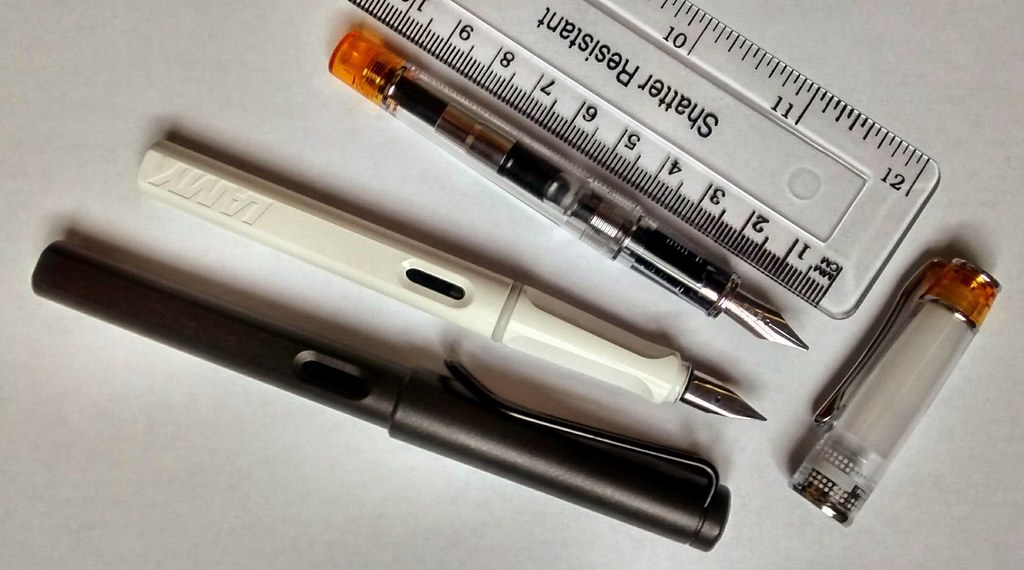 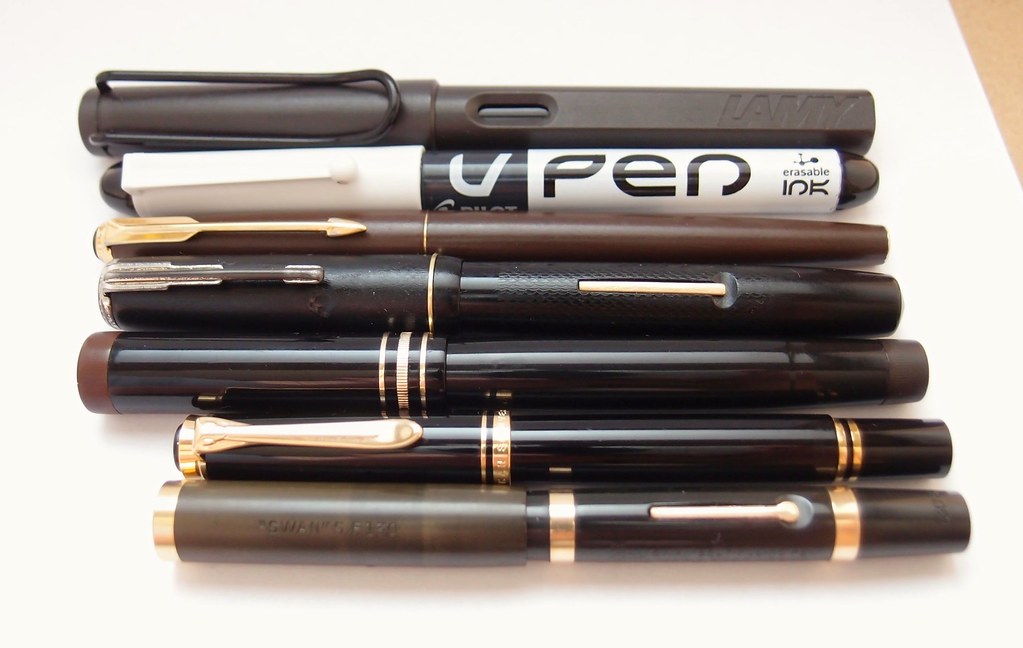 I would like to see if I can reduce the number of pens I use. Can I keep just one pen and one ink combination for longer? What makes a pen the perfect everyday writer? Please join me in this thread if you like.
Last edited by btine on July 8th, 2018, 8:01 am, edited 1 time in total.
Top

For many years, it seemed natural that if I wanted a pen I would just walk in to a stationary shop and pick one. When fountain pens became a hobby, suddenly finding a right one started to be much more complicated.

You think not only about the fine or medium nib, a suitable price point or a particular brand you trust in terms of quality and reliability, but begin exploring unlimited options of the physical size, aesthetics, writing qualities, captivating technical solutions and absorbing pen histories. You start looking for quality reviews and buying ever new pens to try something new.

I was given my first fountain pen in the mid 80s when starting primary school, a Hero 616, 329 or a similar model. I guess they were just readily available around and sold cheap in every stationary shop. They were even cheaper from small traders from the Soviet republics. It's funny but I can't remember any USSR made pens.

We were required to use fountain pens to practice handwriting soon after first drills with pencils. The Heros were just fine. I can't recall any blots or other issues apart from occasional hard starts after my pen was unintentionally left open.

For all these years, I have been avoiding Chinese hooded pens. I'm not sure if it's more because I associate them with pens for kids or something in the shape. Nevermind. I've decided to revisit some of the pens from my past and bought the Golden Star 565.


Golden Star, Kin Sin or Jinxing, all refer to Venus, the planet, but the name originated from the family names of the three Korean brothers who in 1932 founded the first factory in Shanghai. The second factory in Beijing continued fountain pen production to about 2003 (https://forums.watchuseek.com/f221/gold ... ics/765671).

Golden Star 565 was produced in several colours with steel and gold plated caps. At some point, it was copied and produced as Hero 565, which some find of inferior quality.

The 565 is a slightly shorter and stubbier than most Chinese pens. It's a pleasant writer but short of being remarkable in any way.

I started using it two weeks ago as my main writer to see if I could live with only one basic pen. I also wanted to recall the feel of what it was like to write with a similar pen in my school days.

At first, I kept another pen in my bag, but after a while, I have gained enough confidence to drop the backup out. My 565 has proved to be reliable and good enough for most tasks and I rather like it. 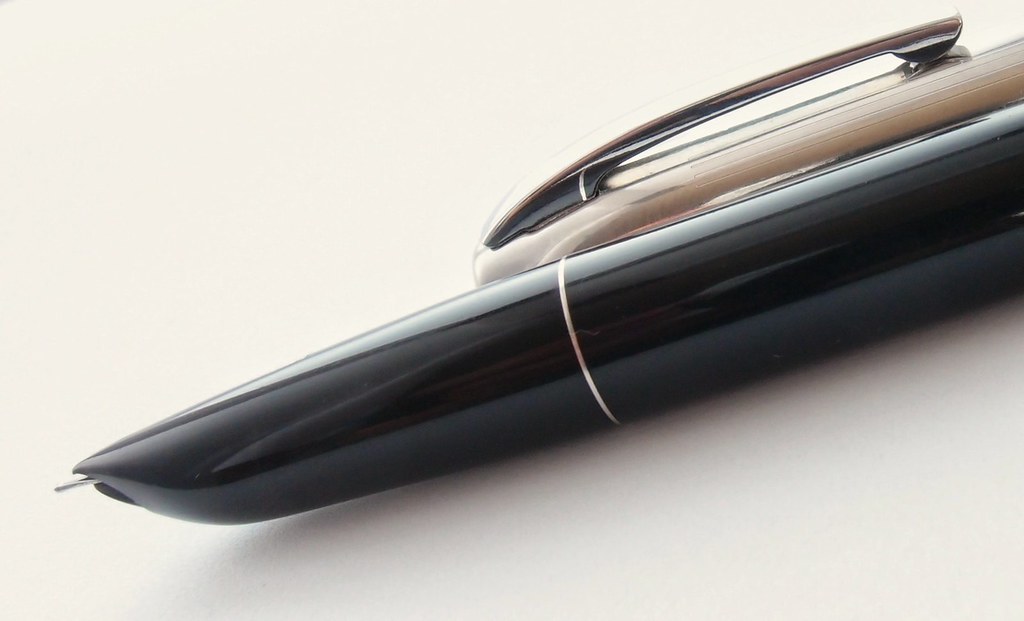 The 565 doesn't appear to excel in anything. Just another alright pen. However, the price makes it rather attractive comparing to more expensive modern pens.

Relability. The pen starts every time it touches the paper and the nib/feed doesn't dry up easily.
Portable: shorter and lighter than most. I do like smaller pens and it's really hard to find something below 135 mm these days.
Smooth, silky point; ridiculously smooth in my opinion.
Wide section. I found it hard to control at first, but now, apart from feeling comfortable, it gives that strange feeling of writing with something much bigger and a bit of luxury when paired with the very smooth nib.
Other details: really good looking cap, clip and beautiful arrow, not plated iron alloy cap resistant to scratches (the clip seems to be made of a different alloy) 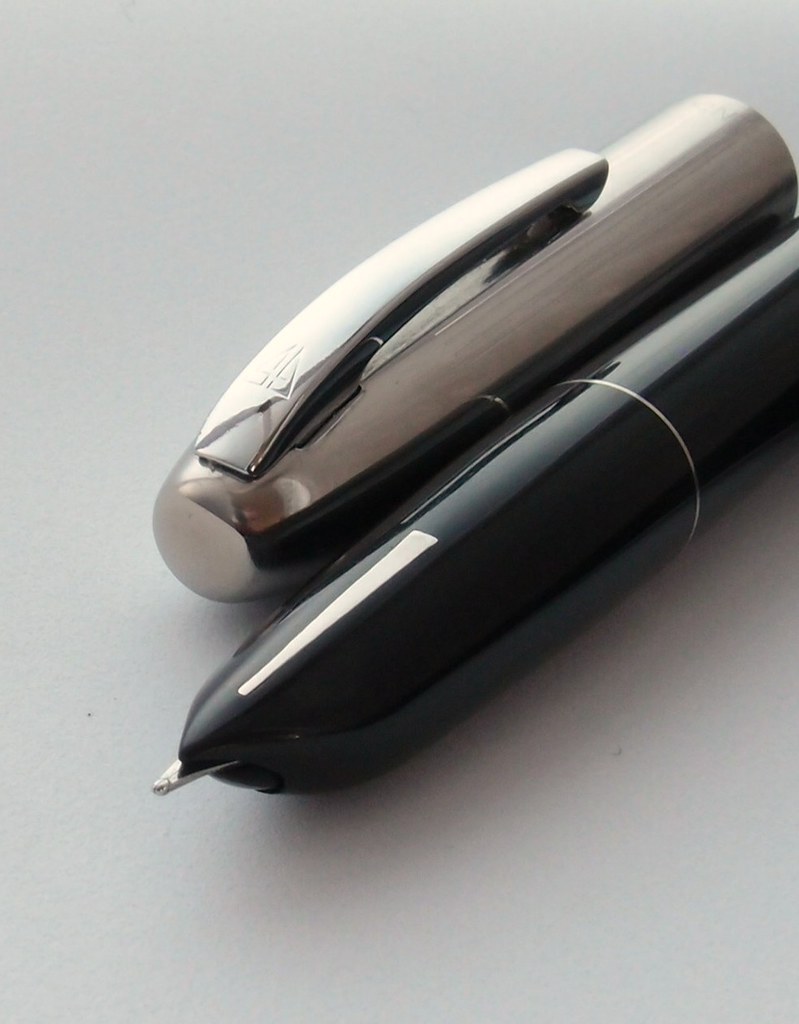 Very dry writer at first. The pen needed a bit of nib adjusting for richer flow and the right ink to bring it to my acceptable level of ink colour saturation when writing.
Wobbly and very tight clip. These are likely design issues but wobbliness shows some additional manufacturing deficiencies.
Friction fit cap doesn't give a proper indication when the pen is closed securely.
Relatively small ink volume capacity: 0.5-0.6 ml.
No ink view, but it's easy to see the ink level once the barrel is unscrewed. 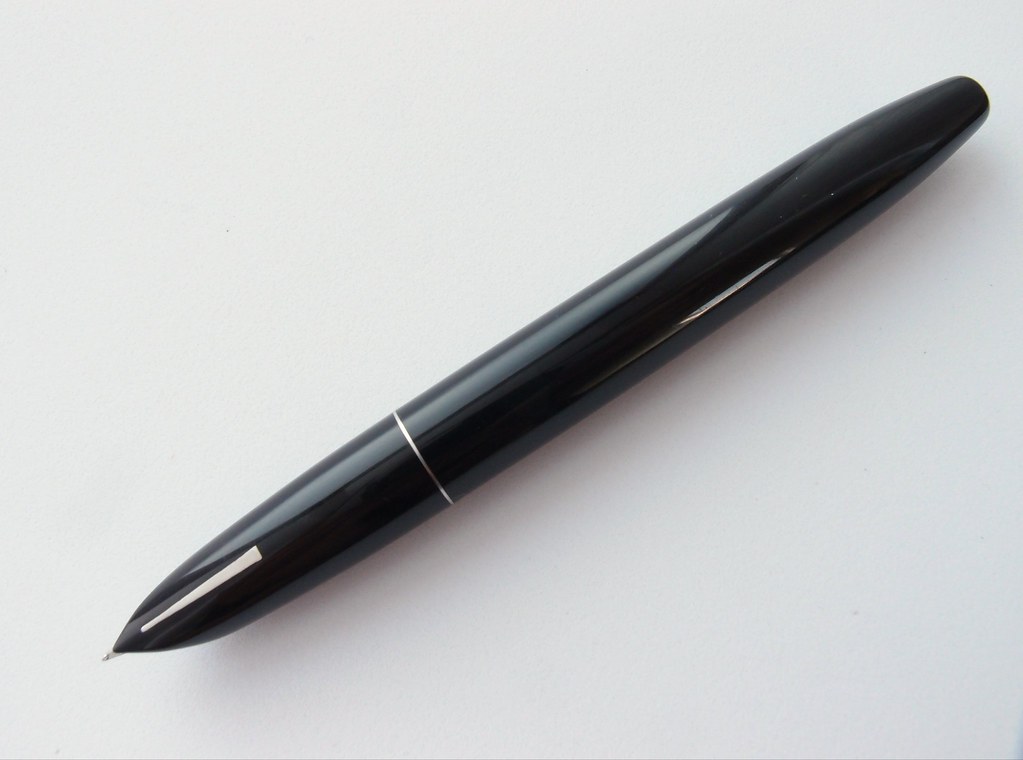 I've been using Pelikan 28 Silvexa for well over two weeks. The 14kt nib was slightly bent, but, instead of reviving it, I decided to try a steel EF nib from a Pelikano. Well, the nib is only a little short of being splendid; it's as fine as EF should be, smoother than expected and the grey colour of steel complements rather well the rest of the pen. 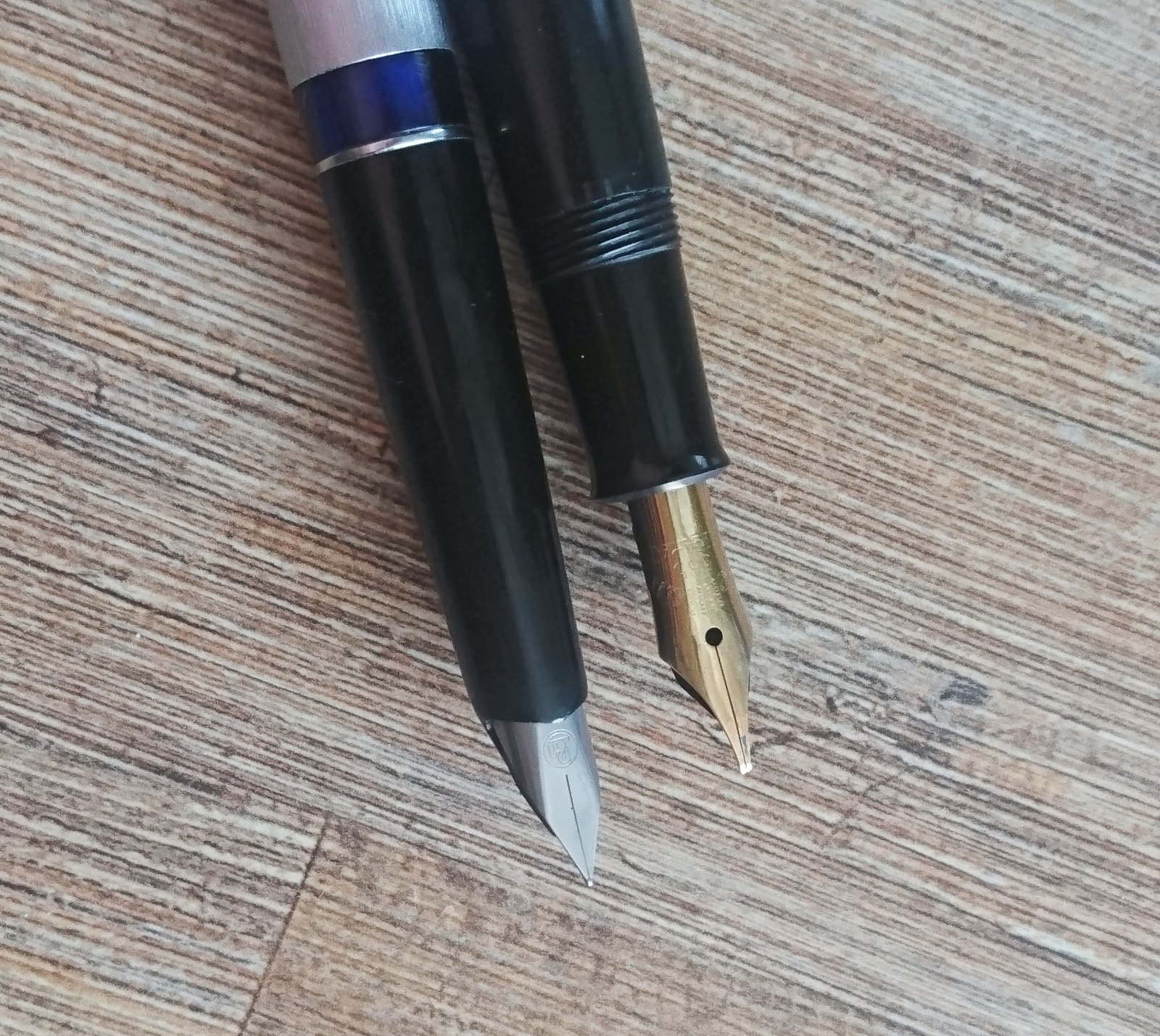 Pelikan P28 belongs to the group of the redesigned half covered nib pens made between 1969 and 79. Either cartridge or piston fillers, these pens are simple in maintaining and use. At 133 mm when closed and 125 opened they are well balanced medium sized pens, whether used posted or unposted. All-plastic models PK and MK are very light, less than 10 g. Models with metal caps are about 15 g, and all-metal pens like Silvexa (?Silver Star) or P28 weight around 20 g.

From my limited experience, the most problematic models are those with plastic caps which tend to suffer from cracks. Apart from that all these pens seem almost foolproof.

The nibs are easier to change even than those on Lamy Safari. Either gold or steel they can be found in the full range of sizes: St, EEF, EF, F, M, B, BB, OF, OM, OB and OBB. Well, most main companies in those days kept similar choice anyway: Montblanc, Geha, Lamy but also French Waterman, Spanish Super T and Italian Aurora. I think that only Parker had a greater number of exotic point sizes.


Could do with some changes?

The base of the clip is narrow which may cause bending sideways with time, but it was modified on the later models. Not sure how effective is the single ink with broader nib points.

I wish there was a sligtly shorter version.


Overall, the P28 is a medium uncomplicated, well designed and made fountain pen. I've been using it for the last two weeks and have nothing to complain about. Neither entirely vintage or modern it keeps the best features of the both worlds.

"Argument" - Füllhalterfabrik in Berlin was owned by Georg Karasch. The company manufactured fountain pens and mechanical pencils from the early 20s to 60s.

The first models were probably safety pens. Later, piston filling pens were developed including seemingly the most popular Argument Füll-Fix line. The Füll-Fix pens, as far I can tell, had the whole section swappable. It's hard to judge from one specimen and very limited information on the internet but the pens appear to be of rather good quality; maybe even comparable to Kawecos of that time.


This particular pen, Argument Füll-Fix 104, was sold by the bookseller and publisher Otto Mewes to Elfriede Dittmar living on the Grünstrasse 18 in Jüterbog on the 23 October 1939. For some reasons, at some point, it found the way to England. A small time capsule it is.

I haven't attempted the restoration yet, so can't tell much about the internals, but will try updating the post if decide to proceed. Someone mentioned somewhere that the filling mechanism is made partially of aluminium, which would explain relatively high weight of the pen. Unfortunately, the some kind of alloy nib is badly cracked and the only options are to have it welded or to wait for an appropriate replacement to appear miraculously. 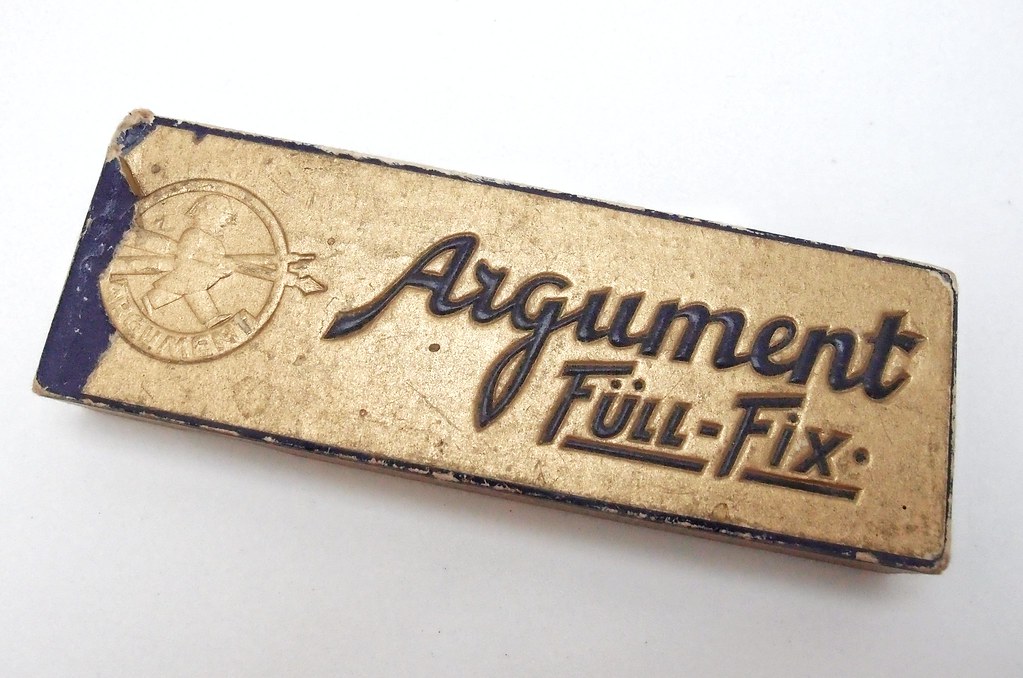 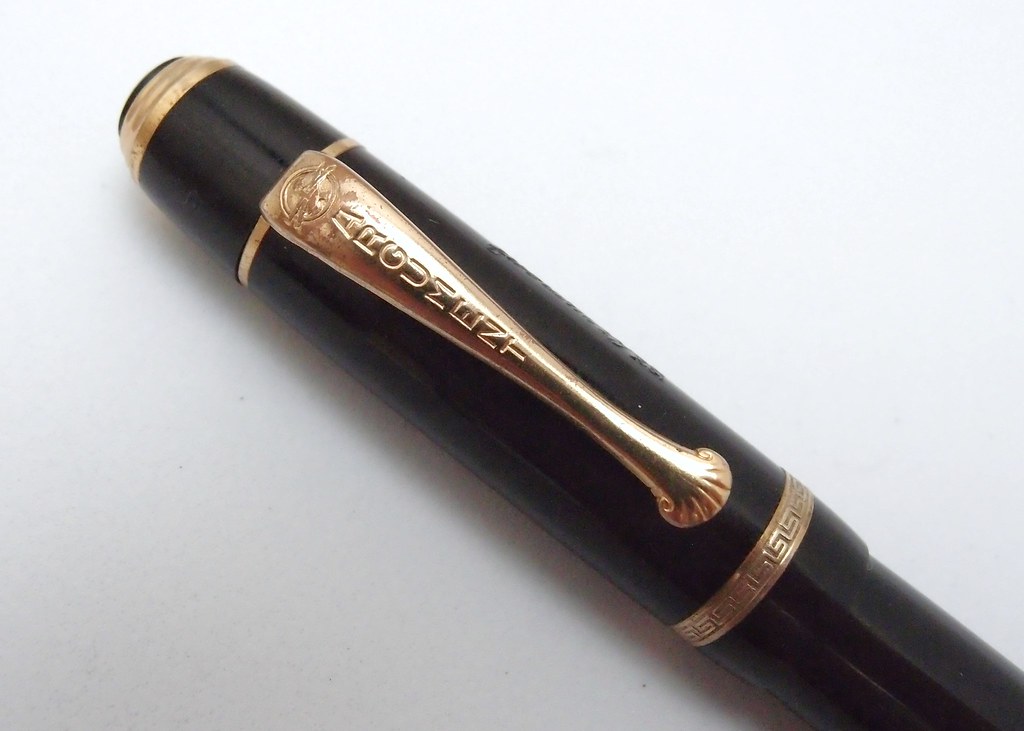 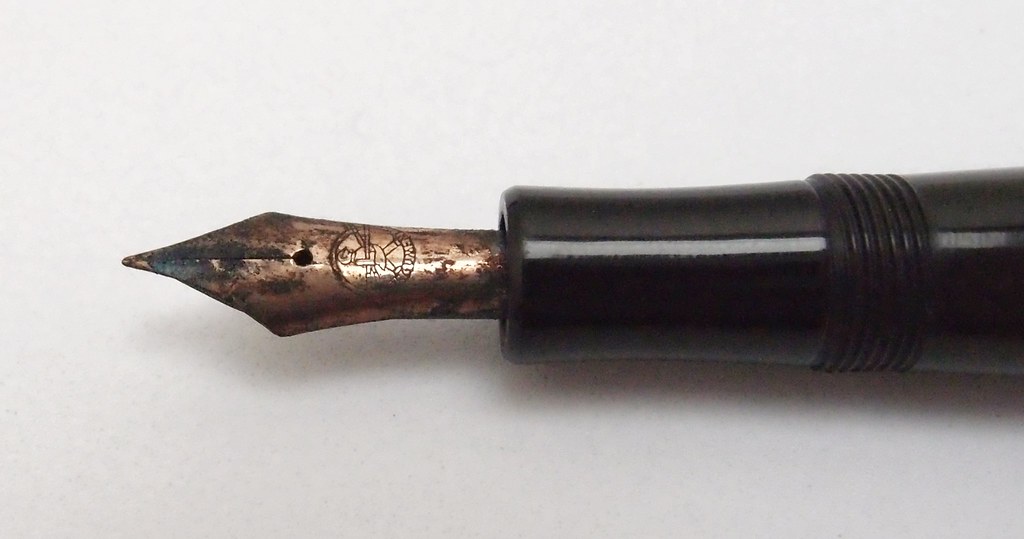 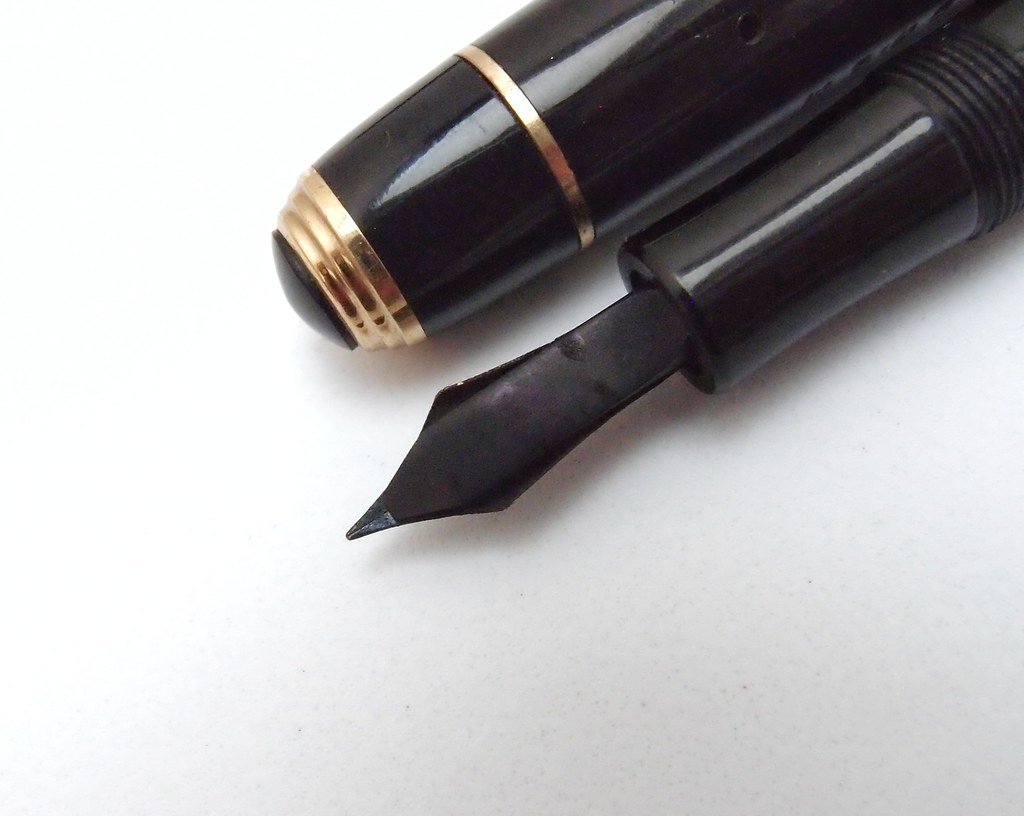 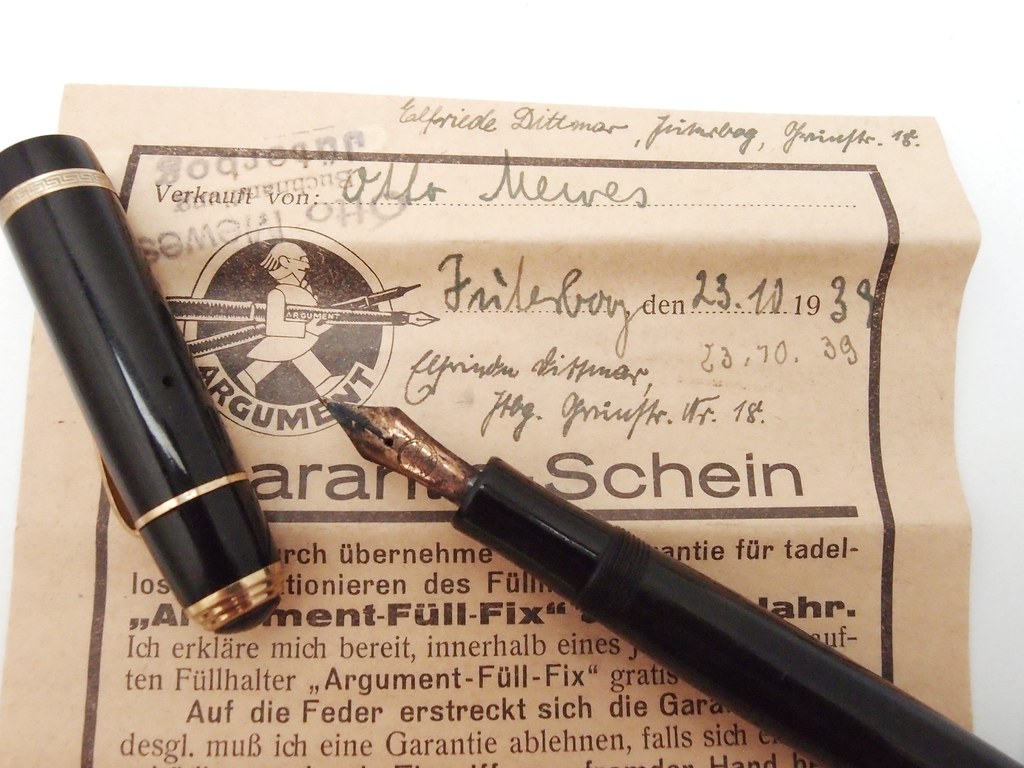 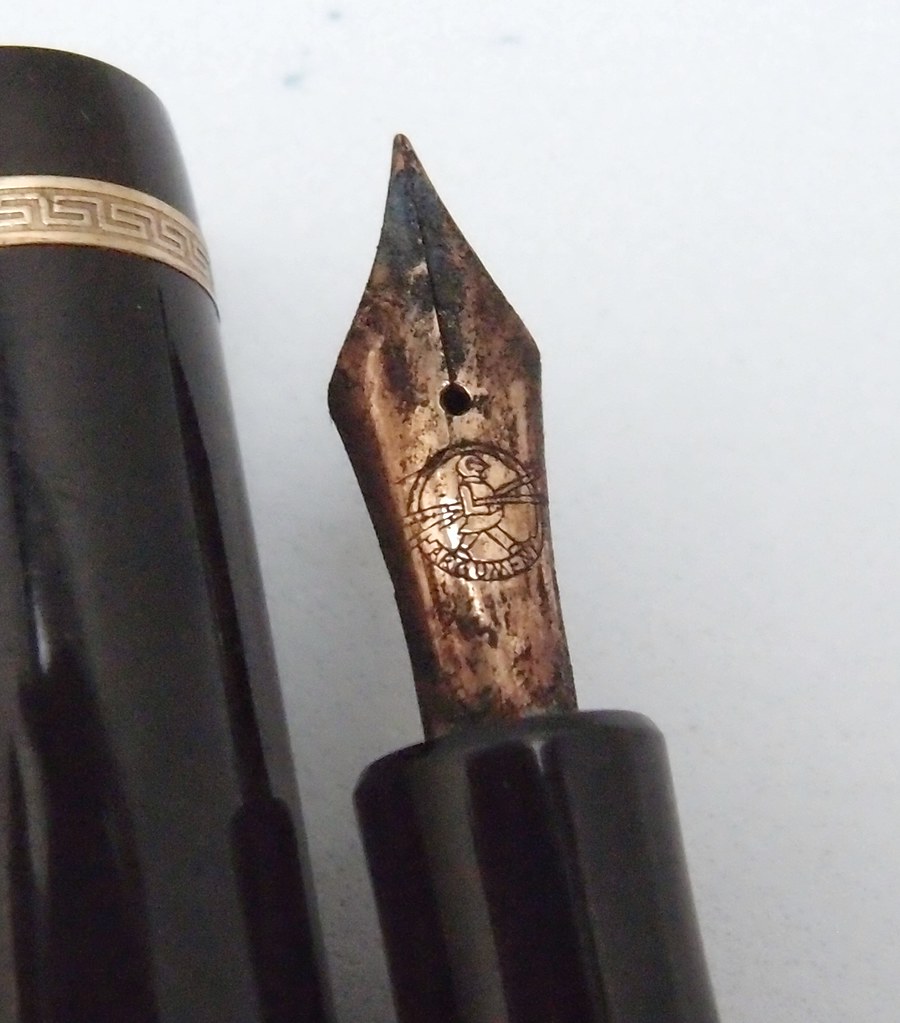